Rockland Broad: a bolt from the blue 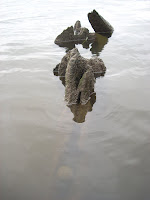 STRANGE islands are strung across the width of Rockland Broad. Strange because they are all roughly the same length and follow a straight line. Mature trees might grow there and swans may make their nests , but these islands were not built by nature.

Instead they are the remains of at least a dozen wherries, sunk during the Second World War. They are known as the Slaughters - an appropriately gruesome name you might think.

Unfortunately you can't see the islands from the path that Wherryman's Way walkers take as they head out from Rockland Staithe towards Claxton. But one day last summer, I paddled my canoe down from that same staithe to take a closer look. Because they say these hulks emerge at low tide. At first I saw nothing; low tide at Rockland, I discovered, is an awful lot later than the quoted figure for Yarmouth in the tide tables book.

But as I was about to give up I suddenly found my canoe grounded on the unmistakeable remains of ship's timbers. Peering beneath the murky surface, I could also make out some sort of bolt with a rounded head - you can just make it out at the bottom of this photo. One arm went in up to the shoulder - no easy job in an unstable canoe - and ten seconds later I was the proud owner of a 27" iron bolt.

The remains of Star of Hope, Gleaner, Unexpected, Diligent, Chieftain, Providence, Cambra, Madge, Tiger, Empress, Leverett and Myth all lie beneath the Broad. I can't prove it but I reckon my bolt belonged to either Chieftain or Providence. Whatever ...it's a proper bit of wherry history - and it's mine.

So why won't Mrs Silk let me keep it on the mantlepiece? 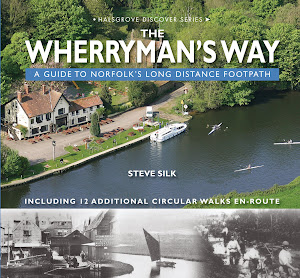 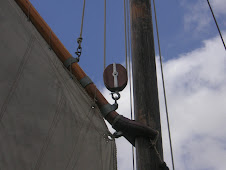